Back in December, 1998, a looming deadline imposed by the U.S. Environmental Protection Agency had owners of underground fuel storage tanks scrambling. The agency had enacted tough regulations requiring corrosion protection and spill and leak protection of tanks, forcing gas station operators to either upgrade them, replace them, or simply remove them.

As a result, a new type of fuel system known as above-ground storage and dispensing systems came into vogue, offering an easier option. Companies who sold the systems, like Bryant Fuel Systems, began to prosper. But Bryant, based in Bakersfield, California, didn’t just smell a quick buck and get into the business overnight. They had already been established ten years earlier to design and manufacture above-ground storage systems after foreseeing a long-range need. Now, with about 20 employees, George Adam, contracting and sales manager, describes the company as “a small emerging business.”

Sensing the difficulties of USTs and their ever-tightening regulations, a group of people joined forces to start Bryant Fuel Systems in 1988. Adam, the only founding member still with the company, recalls, “There were a small handful of folks with different areas of expertise. I came from a military background. We had some folks from the petroleum industry and engineering involved in starting the company.” He continues, “A couple of our founding members realized that underground tanks were coming under closer scrutiny, and we approached the regulatory entities in California about the possibilities of building above-ground tanks and, in particular, complete or integrated or packaged systems, and asked them what would be entailed to garner their approval.”

While underground storage tanks (USTs) still see use where space is a deciding factor, such as at a downtown or corner gas station, their disadvantages are obvious. Steel ones corrode over time and develop leaks, allowing liquid to seep into surrounding soil and eventually the groundwater. Even fiberglass versions can develop holes in them. And because they’re hidden underground, it’s difficult to tell when a problem occurs, assess the extent of it, and do anything about it.

Accordingly, regulatory and testing requirements for USTs have become increasingly stringent. Compliance includes the installation, maintenance, and periodic testing of leak detection and containment systems. Closure of UST systems requires the cleaning, removal, and disposal of not only the tank but piping, dispensing equipment, and wastes generated during their cleaning. Soil samples and groundwater samples must be collected and analyzed. 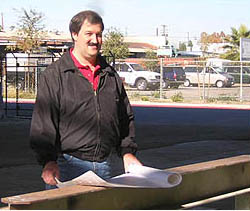 Bryant’s engineer Pal Bench carries out a host of duties.

Originally subcontracting all its manufacturing, Bryant sold its first fuel system in 1989. In 1992, the company began operating its own manufacturing facility, and in 1995, the company received a boost when it secured its first General Services Administration contract with the federal government. In 2001, the company was bought by Clayton Enterprises.

Bryant Fuel Systems manufactures storage tanks and fuel systems ranging in size from 250-gallon units to massive 50,000-gallon behemoths for diesel fuel, aviation fuels, and gasoline. They can also be used for petroleum, chemicals, and other industrial fluids. Customers include all branches of the federal government, including the Department of Defense, the State Department, NASA, and the U.S. Post Office. They also sell to state and local jurisdictions. Commercial customers include airports, trucking and construction companies, and farming and ranching operations.

Bryant’s above-ground storage (AST) systems come equipped with steel tanks attached to a steel dike, which acts as a secondary containment system in case of leaks or spills. Their systems typically have all the equipment for dispensing fuel, including pumps, meters, and electronic equipment, all within the dike. Installers use a fork lift or crane to put one in place, after which they’re ready to program and operate.

Anyone can see that above-ground refueling systems lower installation costs. But even more importantly, as Adam says, “With an above-ground system, if you have a problem, you can see it and fix it.” And when it comes time to move one, you can easily relocate and operate it somewhere else. 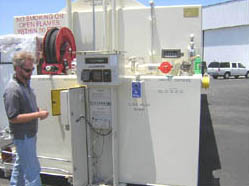 John Gittins of Gittins Environmental, one of the outside engineering firms that works with Bryant, sets up a 12,000-gallon system at French Valley Airport in Riverside County, California.

In designing its AST systems, Bryant takes an approach that involves outsourcing most of the engineering work, Adam states, “Virtually every project involves significant engineering in one form or another.” They have one engineer on staff, Paul Bench, who interfaces with customers and prospects to provide mechanical, site plan, and shop drawings. He also works with engineers they contract with outside the company.

When they require stamped drawings or permitting, Bryant calls on three or four outside engineers they use regularly. These include David Schnabel, a retired Army lieutenant colonel; Process Unlimited in Bakersfield, which has extensive oilfield experience; and E-Marc, another Bakersfield firm. They have also worked with well-known firms such as CH2M Hill and Jacobs Engineering. “We recently put in two fuel systems at Fort Knox and spent a long time working with Jacobs on that project. So a lot of time, we’ll interact with firms the government is contracted with for site design-build projects, where our fuel system may be just a portion of the project,” Adam explains. When they put in a 30,000-gallon system for the Navy at China Lake, California to rapid-refuel military aircraft, Steve Cebell of E-Marc interfaced with Navy engineers on site and also with the Navy petroleum office and naval air systems office in Washington, D.C.
Another engineer Bryant uses is John Gittins, a P.E. in California with a strong background in environmental engineering and regulatory compliance. “John not only helps us with system design but frequently does a lot of the permitting. So if we’ve got to make system modifications or changes for the sake of code compliance, he works the entire issue for us,” according to Adam. 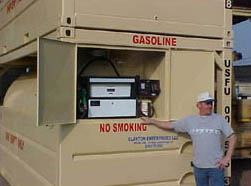 Bryant’s latest product is a stackable system for shipping as containerized freight.

In recent years, Bryant has come up with a new form of above-ground tank known as a stackable fuel system. This takes the shape of a containerized freight module like that seen stacked on cargo ships, so it ships long distances easily like other forms of freight. “That was a very extensive engineering effort to design a fuel system especially for the military, but it has some commercial applications as well,” Adam reports. The firm collaborated on this with Radian, an engineering firm in Virginia that works on petroleum and fuel handling equipment for the military.

In 2002, Bryant set off in yet another innovative direction when the company helped develop processing equipment for biodiesel, an emerging alternative fuel. “For the alternative fuels market, the starting gun has gone off,” as Adam puts it. They’ve built several plants that process biodiesel fuel under contract to another company, with two going in at Wright-Patterson Air Force Base in Ohio and one for Kansas City Power and Light. And they’re building another system for the Bonneville Power Administration in Vancouver, Washington that will pump biodiesel or E-85, a mixture of unleaded gas and ethanol. Adam sees the market in alternative fuels burgeoning as tax advantages take effect and clean air requirements get stricter on diesel. “I’m getting calls just about daily.” These systems will mainly fuel passenger vehicles in government agency fleets, which have been required to use alternative fuels.

With all this going on, Adam reports, “Things look very positive the next 18 to 24 months. Hopefully, our engineering workload is going to grow. Whether that means we look to bring another person on board full-time or expand our outsourcing, I don’t know which direction we might take.” Which ever way they go, they should stay busy for years to come offering an environmentally friendly replacement for underground storage tanks.

BFSAdmin2019-07-15T18:03:16+00:00Bryant In the News|
We use cookies to ensure that we give you the best experience on our website. If you continue to use this site we will assume that you are happy with it.OkNoPrivacy policy